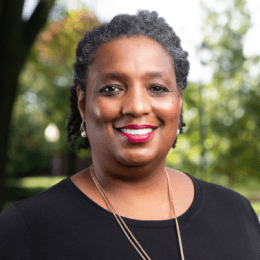 Andrea Abrams came to Centre in 2007 as Centre’s first Consortium for Faculty Diversity at Liberal Arts Colleges Postdoctoral Fellow, and became assistant professor of anthropology in 2009. She was promoted to associate professor in 2014. In 2018 she was named associate vice president for diversity affairs & special assistant to the president, and in 2021 was named vice president for diversity, equity, and inclusion. Before coming to Centre, Abrams taught at the University of Southern Mississippi, Emory University, Agnes Scott College, and Spelman College.

Her research focuses on racial and gender issues in the South. She is the author of God and Blackness: Race, Gender and Identity in a Middle-Class Afrocentric Church (NYU Press, 2014).

She led a study-abroad trip to Ghana during CentreTerm 2013, and co-taught Spring Term in London, England in 2015.