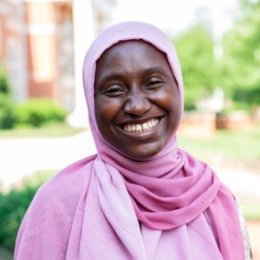 Mariama Minteh joined the Admission team in 2021. She also serves as a liaison for Centre’s Bonner Program. Mariama was part of the inaugural class of Centre's Grissom Scholars Program and graduated from Centre with a BA in Anthropology/Sociology and a minor in Social Justice. During her senior year, she did an independent study that was focused on the shared and competing constructions of blackness between Black Africans, African Americans and Afro-Caribbeans in the United States.

She previously worked at Kentucky Refugee Ministries and Family & Children's Place, both non-profits in Louisville, KY. She has also served as a faculty member for Kentucky’s Governor’s Scholars program. Mariama was born and raised in The Gambia (West Africa) and she's a first-generation college graduate.