A spirited gubernatorial debate took place at Centre College, in partnership with WAVE3 News and sponsor AARP, on Oct. 6 in Newlin Hall at Centre’s Norton Center for the Arts. Guided by the College’s commitment to host important conversations in and out of the classroom, the event featured a lively discussion between candidates Matt Bevin and Jack Conway about how each of them would govern if elected.

Long regarded as a place with a reputation of quality in both education and entertainment that extends to political events, Centre has hosted four total debates that have taken place on what many consider “hallowed political ground,” welcoming vice presidential debates in 2000 and 2012 as well as a gubernatorial debate in 2007 to Newlin Hall.

“Centre College is known as a place where important conversations occur,” said President John A. Roush. “The Newlin Hall stage has been a place where men and women have come together over time to talk about how they would govern and how they would perform in important elected offices. That’s a habit we’ve developed here at the College, and I see that continuing going forward.”

Roush also explained that the College is about the “business of preparing citizen leaders,” as evidenced by the Centre student and overall campus participation. The majority of the 1,000 debate tickets were committed to 250 Centre students and 125 members of the Centre community, while the remaining tickets accommodated 225 members of the public in addition to reserved seating for the campaigns, media and AARP.

Centre students engaged in the democratic process by live blogging the event, hosting a panel on Commonwealth issues prior to the debate and more. During the debate, students Zach Throne ’16, Kelli South ’16 and Dexter Horne ’16 hosted a live blog while stationed in the media room to provide commentary and insight on issues as the candidates debated onstage.

“They had to marshal a large amount of evidence and information to be able to comment thoughtfully and speedily on the debate in real-time,” he explained. “It also allowed us to showcase a ‘student perspective’ to our internet audience.”

The debate is also the subject of classroom discussion at Centre; Knoll assigned his students to either attend the debate in person or watch the event on television. On Wednesday, his classes spent the day reviewing the debate, watching clips and discussing how the students can better understand and interpret the debate in light of concepts and material that they have learned this semester, including political ideologies, polarization, federalism and voting patterns.

“The true winners last night were Kentucky voters,” Debate Steering Committee Chair and Director of Communications Michael Strysick said, “and to that end, we can all be proud to have provided an important educational opportunity for the Commonwealth.” 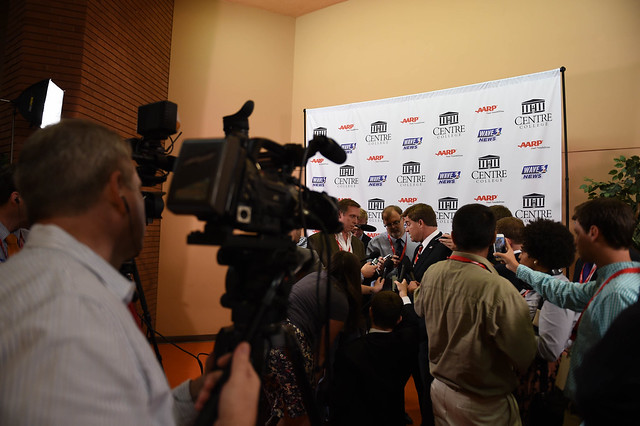