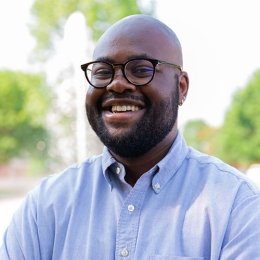 Aaron Guerrier joined Centre’s Admission team in 2021. He also works as the New Horizons liaison between the Office of Admission and the Office of Diversity and Inclusion. Aaron was awarded the Posse Scholarship in 2016 and graduated from Centre College (2020) with a BS in Economics and Finance with a minor in Social Justice.

In his senior year, Aaron conducted an Independent Study on Gentrification and the Affordable Housing Crisis in low-income communities of his home state, Massachusetts. Previously, he has worked as an Operations Assistant for Edelweiss Lodge & Resort in Bavaria, Germany along with Consulting Manager for Better Nonprofit at Third Sector New England (TSNE). Aaron grew up in Randolph, Massachusetts.