Teshera will be teaching Herpetology, BIO 380, in spring 2023, and like his previous herpetology courses, he expects it will create curiosity among biology majors and non-majors alike.

Last year, his CentreTerm course titled "Venomous Reptiles: Ecology, Evolution & Biological Significance" drew attention for its name alone, filling up within two days and sparking interest among students to have a hands-on experience with the often-feared creatures.

“Love them or hate them, everyone knows what a rattlesnake is—many people fear them,” Teshera said. “Yet despite this fear, most people will, grudgingly perhaps, admit to an uneasy curiosity and even fascination with them.”

Teshera went on to explain that his courses are appealing, because they “focus on organisms that evoke strong visceral reactions.” One of the main goals of his courses and research, he says, is to foster respect and empathy for the animals.

“I think this has largely worked. Many students have approached me after taking the class and said that they didn't like snakes, or were ambivalent about them, before taking the course. But afterwards, they said they really developed a respect and new, positive outlook about them. This is really the greatest, and most fulfilling, learning outcome I could hope to achieve.” 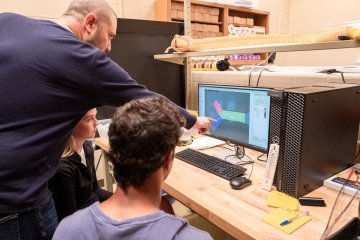 For his upcoming spring course and research, Teshera said he’s acquired 57 copperheads, cottonmouths and timber rattlesnakes, which students helped him collect in Alabama this past summer. After they adjust to captivity, the snakes will be used for behavioral experiments conducted by Teshera and students to investigate how each snake makes complex behavioral decisions during predatory episodes using a y-maze.

Biology major Sherice Sutherland ’24 has an interest in medicine, and said the class she took with Teshera was a great fit for her potential career plans.

“I learned so much about how snake venom toxins can be used to treat many medical conditions,” Sutherland said. “One example of this is Captopril, which is a type of drug used to decrease hypertension. The main compound in Captopril is actually derived from the venom of Bothrops jararaca, a pit viper found in Brazil. Snake venom is also used to treat diabetes complications and decrease the risk of heart attacks, among many other things.”

Lauren Jung ‘23 said the course also sparked her interest in snakes, leading her to enroll in Teshera’s senior seminar focused on constrictor snakes.

“I absolutely loved this class and would definitely recommend it to another student,” Jung said. “Coming into the class, I knew almost nothing about snakes. Now, one of my favorite things is going to the Kentucky Reptile Zoo to see some of the snakes in person that we had discussed in class.”

Teshera said he’s thankful that the College endorses such a diverse offering of CentreTerm courses, and he is hoping down the road to offer a course in the Florida Everglades, where students can find Burmese pythons and other invasive reptile species in the wild.

“This is one of the things I love about Centre: We get to teach our areas of specialty,” he said. “Since the faculty here are so diverse in their specific fields, it fits in perfectly with the liberal arts and sciences model. One look at the annual CentreTerm offerings reveals a wide range of unique and interesting courses for students to take, and I think a study of venomous reptiles fits in here nicely.

“It's classes like these that allow Centre students to graduate with more of an overall awareness of the world.”

Centre College is proud to welcome the following diverse group of 16 new full-time faculty members representing all three academic divisions. Vice President for Academic Affairs and Dean of the...

Course-based undergraduate research experiences (CUREs) are set to receive a boost at Centre College and across the country from the National Science Foundation. Daniel Scott, associate professor of...

Centre College has again been acknowledged for its world-class education by College Raptor. The leading college planning platform named Centre a 2023 “Hidden Gem” in its latest guide that helps...