During CentreTerm, it’s all play and all work for theatre course participants

Through a partnership with The Farm Theater, students are building a play from the ground up in three short weeks – with professional playwright Dipti Bramhandkar’s help.

“Writing is such a solo process, the minute that you realize you have this amazing group of people who bring their own interpretations and texture. You forget … when you're holed up at home working on this, that you'll have a whole team of people ready to help you bring it to life,” Bramhandkar said. “People start to color in things, and you start to see the full picture.”

The Farm Theater pairs an up-and-coming professional playwright with a college that is willing to invest in that sped-up process. Bramhandkar will see her play, “Soft Launch,” staged and produced for the first time by students at Centre. It’s a comedy written about a group of recent college graduates exploring the what-ifs of life after college.

Laura Taylor is a first-year student at Centre who plans to major in theatre and business. She said theatre has always been a part of her life, but the unique CentreTerm structure has given her a glimpse at what a career in theatre could look like.

“I've been doing theatre my whole life, but every other time I've been balancing schoolwork, other classes and extra-curriculars,” she said. “But with this, it's almost like a job, clocking in and out. I feel like I really have gotten to delve into the play, fully immerse myself in the character. I really love it.”

Taylor plays one of three roommates in the production. Fellow roommates in the play are Hadley O’Bryan — another first-year planning to be a theatre major — and Madjo Doumbia, a sophomore French major who admittedly signed up for the class on a whim.

“This CentreTerm class is different for me, this is my first time ever being part of a play,” Doumbia said. “My decision was so impulsive, I was in my room and heard about it, my audition was also impulsive. I'm glad I made it, though, because it has taken me out of my box. It has been really beneficial for me.”

Those are the kind of stories that Padraic Lillis loves to hear. Lillis is the artistic director of The Farm Theater and was the Humana Visiting Scholar and Artist in Residence at Centre in 2018. A baseball fan, he said the name “Farm Theater” came from the farm system in baseball — preparing individuals for the big leagues.

“Soft Launch” will be the fifth collaboration between The Farm Theater and Centre, a relationship that Lillis calls “foundational.” He said schools sign up for the program without knowing who the playwright is or what the play is about — but The Farm Theater works to pair playwrights with colleges who are invested in the process. 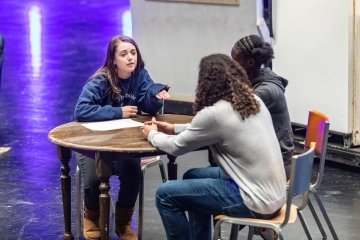 “I think it's amazing in the CentreTerm because the students are committed. They get the experience of being fully dedicated to the project,” Lillis said. “It's not the length of time in number of weeks they'd spend on a play, but because the concentration is so strong … their investment is dense, it's really deep.”

As students gain interest and learn more about the production, the playwright visits the college and collaborates with the students. For Bramhandkar, students might have different takes on a character – and vice versa.

“Some of the benefits of having the writer in the room is you can get answers to things, challenge things directly,” Bramhandkar said. “I think that exchange is a good training ground to create a relationship with a playwright, really understand and contribute to the development of the play. That takes confidence to be willing to have that conversation.”

Sound Designer Tesneem Shalash is in her second year at Centre and is a biochemistry major. She noted how excited she was to have the playwright come to Centre to share ideas.

“It is really nice because (Bramhandkar) has made very specific choices, and I wanted to ask her why she made those choices. And she's willing to listen,” Shalash said. “… I get to see the evolution of the show, from beginning to the final product and say, 'I was involved in the making of this.'”

Lillis has one word to describe the process, both for playwright and students: Empowering. It gives the students voice with a professional, while allowing the playwright to flesh out ideas with a willing group of students.

He said that The Farm Theater hopes it creates relationships that can last – for the playwright and the students involved. 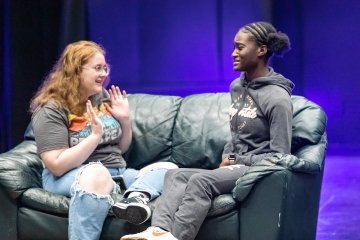 “You get to work on a new play – designing, acting, stage management, directing — the student gets to be the first person to bring the play to life,” he said. “The whole goal is to give life to this play beyond this production. You'll be able to see your contribution. The playwrights that The Farm is working with are early in their career. It's an introduction to having an ongoing relationship with and starting your professional network earlier – they’re not out of reach.”

Caroline Lock, a first-year math major on a premed track, hasn’t had time to fit a theatre class into her schedule this year. But CentreTerm offers a chance to nurture her love of theatre.

“I was really excited to do a theatre CentreTerm course,” she said. “It has been different, but in a good way. I felt like I could connect to the play almost, and it has been really cool to work with the playwright, because we're making it real. I asked Dipti about my character and it really helped, because I really want to portray her the way Dipti envisions it.”

It is the first time in her career that Bramhandkar has worked with students. She said she’s worked on many plays before, but this has been an “exercise in a loss of control and accepting that.”

“When you accept it, that's when the good stuff starts to happen, because you start to see things in new ways,” she said. “This cast, in particular, they're close in age to the characters — they are bringing their own lived experience into these roles. That's very interesting, and I'm learning, most of all, about being here and how characters are fully realized. It's unique and challenging — in a good way.”

Centre College students are leading the charge to find solutions to an important challenge facing Kentucky: access to early childhood education. Students in Associate Professor of Economics and...

Pam Baughman ’93, a longtime Centre Admission staff member, parent and alumna, has been named vice president for student success. The newly created role in the College president’s office grew out of...

Students engage in immersive studies across the globe during CentreTerm ’23

CentreTerm courses kicked off this week with 250 Centre College students in 13 different countries studying abroad/away for the three-week term. The immersive one-course study during CentreTerm is a...