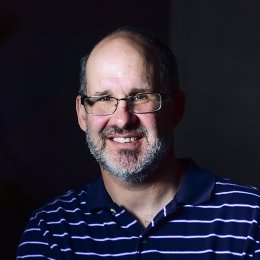 Larry Bitensky is W. George Matton Professor of Music at Centre where he teaches composition, music theory, musicianship, and world music. He was named a Centre Scholar in 2012 and has served as chair of the music program.

Known for music described as “extraordinarily sensitive and beautiful” and “speaking directly to the heart,” composer and pianist Bitensky has been hailed for works that are satisfying for performers and communicative to audiences. With their emotional intensity, directness, lyrical and sinuous melodies, and funky, polyrhythmic grooves, his works range from wistfully nostalgic, deeply sad, and evocative, to exuberant, playful, and ecstatic.

Educated at Skidmore College, the New England Conservatory of Music, Ithaca College, and Cornell University, Bitensky’s musical personality is rooted in a range of influences. He often seeks to merge the complex structures and expressive range of the classical masters and the innovations of the 20th-century greats with the melodic and rhythmic invention and improvisatory flow of musical traditions from India, Indonesia, the Islamic and Jewish worlds, jazz, and the Grateful Dead. His travels as part of the College’s study abroad program have also allowed him to explore the musical cultures of Morocco, Spain, Turkey, and Bali.

Bitensky first came to national and international attention with a series of works inspired by Jewish musical tradition and culture. In these, he developed a free, quasi-improvisatory lyricism and melodic richness that has become one of his signatures. These works include the award-winning Mishb’rey Yam, a song cycle based on Hebrew texts of the great medieval poet Yehudah Halevi; “…a perfect rest,” an orchestral rhapsody based on the traditional Jewish memorial chant; Awake, You Sleepers!, a concerto for trumpet and wind ensemble based on the sounds of the shofar; and Rapture, a piano work based on Chasidic folk melodies.

He has also received attention for works based on his long association with world-renowned trumpeter Vince DiMartino. These include Awake, You Sleepers! described as “one of the finest additions to the trumpet and wind ensemble repertoire to date;” the polyrhythmic, jazz-infused “From those beginning notes of yearning,” for trumpet and piano; and the comic and macabre The Other Side, for trumpet and chamber ensemble.

A pianist since the age of six, Bitensky’s music is rooted in his sense of what is gratifying for a performer. He regularly returns to the piano as a source of renewal, and he has made numerous contributions to contemporary piano literature. These include the brooding and melancholy The Alchemy of Solitude, the colorful and varied From the Corner Room, the poetic Scent of the World We Gave Up, Rapture, Shouts and Murmurs, and others.

Recorded on Mark Records and Sea Breeze Vista records, Bitensky’s music has been performed by numerous ensembles and at various festivals around North America, Europe, and Asia. His music is published by Silly Black Dog Music.